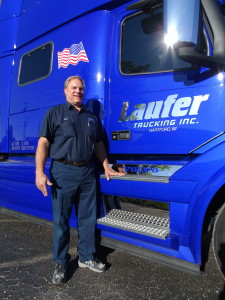 The sun shines brightly at the Laufer Trucking terminal today as Bob Beine embarks on his first trip with his new 2016 Volvo. Bob is headed to Lyndonville, New York to deliver recreational trailers. From there he will head to Niagara Falls to pick up a load of graphite (used in the metal making process), destined for East Chicago IN. After delivering in IN, Bob will bring steel back to Hartford.

Bob was the very first employee hired by Laufer Trucking, on December 1, 1985. He will mark his 30th year with us this year. Bob is an expert flatbed driver who has been a wonderful asset to Laufer Trucking for the last (nearly) 30 years. Bob’s new Volvo is the only blue truck in the fleet and he chose his own decal scheme. He was very specific about wanting “chrome leafing”! (Thanks to Foerster Signs).

After Bob test drove this truck a couple months ago, he said it was the most comfortable truck he had ever driven and today it is finally his for the long haul!